Parts of a Telescope and Their Functions 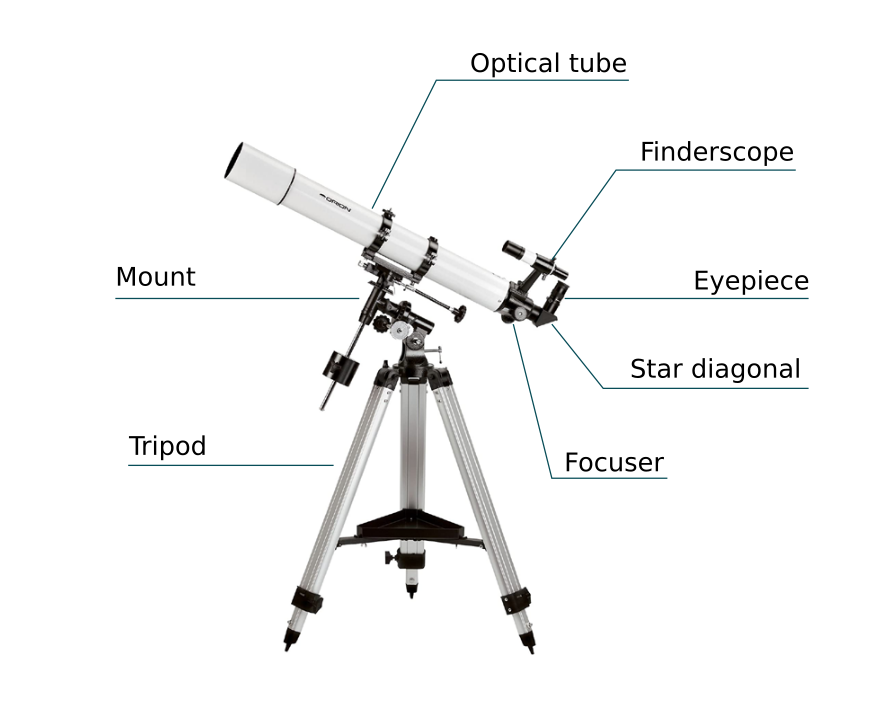 An optical tube is the main part of a telescope. It holds lenses and mirrors that make up the telescope’s optical system. The telescope objective is located inside the tube. It is a lens or a mirror which collects light from observed objects. There is a widespread belief that the main telescope function is to magnify the image. But this is only partially true. Another main function of a telescope is to gather as much light as possible to make faint objects of the night sky visible. So more powerful telescopes have a tube of larger diameter.

An eyepiece is a final part of a telescope’s optical system. It magnifies an image created by an objective and passes it to a human eye. In the old days, one small lens served as an eyepiece. A modern eyepiece is a set of lenses coated with special substances like calcium fluoride or magnesium to minimise a reflection of light. 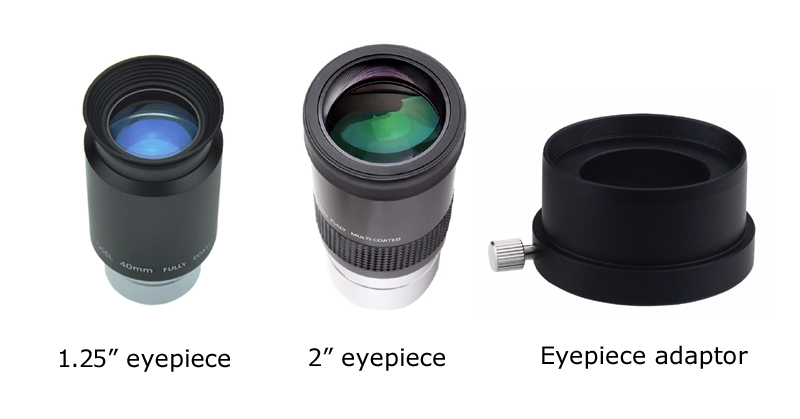 Eyepieces can have different focal lengths starting from 4 mm to 40 mm. By changing an eyepiece, you can change the magnification of a telescope. The bigger the focal length the less magnification you have. Eyepieces can have two standard diameters of 1.25” and 2”. There are several types of eyepieces, and the most popular ones for beginner astronomers on the market are Kellner and Plössl eyepieces. Usually, astronomers have several eyepieces for different observational tasks.

A focuser is a movable tube which accepts an eyepiece or star diagonal. The tube is moved using knobs to adjust the focus of an image. There are two major designs of focusers: Crayford focuser and rack-and-pinion focuser. Inexpensive telescopes for beginners often are equipped with a rack-and-pinion focuser. The Crayford focuser is a more professional and more expensive one. 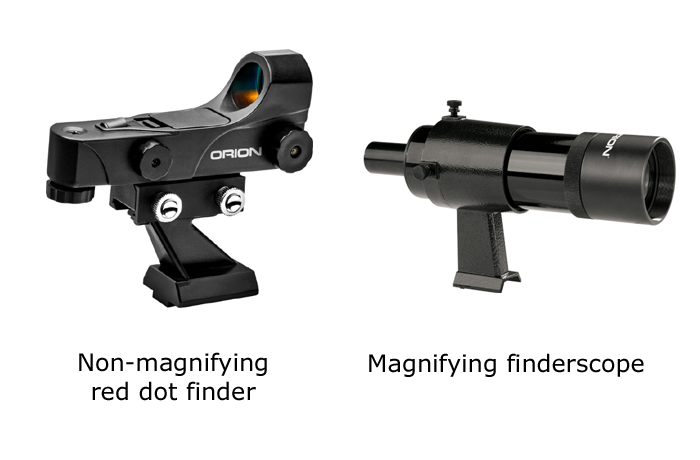 There are different types of finderscopes. Some finderscopes have crosshair inside. Other ones have a red dot in the center and are called “red dot finders”. The red dot finders have a battery and a simple switch to turn the red dot on and off. More professional finderscope has lenses to magnify an image, and it is actually a small refractor telescope.

Finderscopes with lenses are usually characterized by two numbers separated by the “x” symbol. The first number is the finderscope’s magnification and the second one is the objective diameter in millimeters. For example, the 8×50 finderscope means that it has 8x magnification and an objective diameter of 50mm. There are straight finderscopes and models which have a star diagonal for more convenient observations, particularly, on Dobsonian telescopes.

Sometimes it is inconvenient to view directly in a telescope’s eyepiece, because an observer’s neck is bent at an uncomfortable angle. The device called “star diagonal” (or diagonal mirror or diagonal prism) helps in this situation. 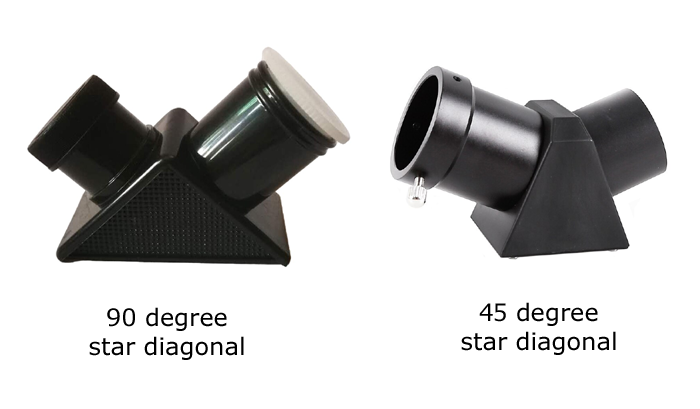 A star diagonal has a mirror or a prism which deflects the light coming from a telescope in a perpendicular direction allowing to view through the telescope more comfortably. Star diagonals are often used with refractors and catadioptric telescopes.

A mount is what a telescope tube sits on. The mount allows you to rotate the telescope tube along two axes in order to direct it to the object of observation. 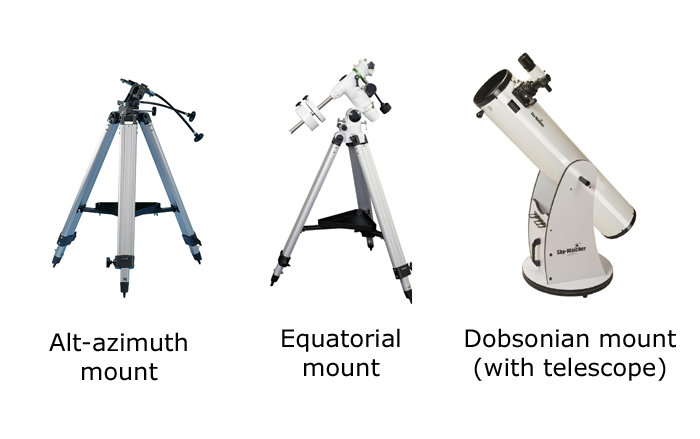 There are two major telescope mount types: alt-azimuth and equatorial. The alt-azimuth mount rotates the telescope tube in the vertical and horizontal direction. This mount is recommended for aspiring stargazers because it is easier to operate. Equatorial mount has more complex mechanical construction and allows tracking of celestial objects. When the equatorial mount is correctly positioned, its one rotational axis is parallel to the Earth’s axis. Object tracking is particularly required in serious astrophotography as for faint night sky objects we need large exposure.

A telescope and its mount usually sit on a tripod. Often a tripod is part of a mount, but not always. A tripod usually has adjustable legs which are usually made of steel or aluminium. Major tripod specifications are weight limit, maximum height and minimum height. Weight limit defines the maximum weight of equipment the tripod can support. A tripod must be sturdy and stable to prevent vibration of a telescope tube, because vibration leads to image wobbling. Longer tripods are required for refractors with long tubes, especially when an observational target is near vertical. Some tripods have a shelf for eyepieces and other accessories. If you are getting the tripod separately from a telescope, it is important to check if the tripod will support the weight of your telescope tube and the mount.