Easy Solar System Objects to Observe Through Your Telescope

There are a lot of amazing, fantastic and beautiful things that you can observe in space. If you are a beginner who just got a new telescope, you can easily start with these Solar System objects. They are not difficult to find in the sky; they are bright, big, and they are visible with the naked eye.

The only natural satellite of the Earth is a great object for observations. Even a small telescope will be enough to view many of its craters, seas and mountains. Under magnification of 100x or higher the Moon disk does not fit the telescope field of view and you will have to observe the Lunar surface piece by piece. A Barlow lens can help to double or triple magnification of your instrument so you will be able to see even more details of the Moon surface. Lunar details are best visible near the terminator line which is the border between day and night on the Moon.

Crater boundaries, mountains and other surface irregularities cast long shadows in this so-called twilight zone and we see them in high contrast. Over time, the terminator line moves across the lunar surface, creating better observational conditions for different parts of the satellite.

Before trying to observe the Sun, you should know the following. Never look at the Sun through a telescope or binoculars without a special solar filter. It is extremely dangerous because sunlight concentrated by the optics will burn your eye retina. There are two safe ways to observe the Sun using a telescope. The first one is to use a solar aperture filter. This filter should be attached securely to the front of the telescope. The second method of observation is to project the Sun image on a sheet of paper or white card placed after the telescope’s eyepiece. The second way is recommended to use only with small telescopes. Larger telescopes are not recommended to point to the Sun without a solar aperture filter because the heat accumulated inside their optical system can damage the instrument.

From an observation point of view, a major exciting feature of our luminary is sunspots. They can be seen even in a small telescope or binoculars with an aperture of 50-60 mm or more.

Sunspots are darker regions of the Sun’s surface, where temperature is lower than average surface temperature. Sunspots observed are huge, their dimensions are comparable to the size of our Earth. Sunspots are temporary phenomena: they appear, expand, contract and disappear. Moreover, if you observe sunspots day by day, then you will notice that they are moving, because the Sun is rotating with a period of about 25 days.

Another interesting feature of the Sun image is limb darkening. It is partially caused by the fact that the temperature near the star’s surface is lower than that in the inner region.

Jupiter is one of the brightest points in the sky for the unaided eye, and among the planets, only Venus is brighter than Jupiter. This largest planet in the Solar system is extremely exciting to observe as it shows many details. Even a small telescope will show famous cloud bands of the gas giant. Using a larger instrument with aperture 100 mm or more under good observing conditions you will be able to view Jupiter’s Great Red Spot. The Great Red Spot is a giant storm in Jupiter’s atmosphere and its size is larger than the size of the Earth.

Another interesting task for an amateur astronomer is to find major Jupiter moons. Four largest Jupiter moons – Io, Europa, Ganymede and Callisto – can be found using binoculars or a telescope. They were discovered by Galileo Galilei and now often are called Galilean moons. They are rotating around its planet and therefore constantly are changing their positions. If the satellite is in front of the Jupiter, then it casts a round shadow on it. This so-called transit event can be observed with a large enough telescope. It is quite a frequent astronomical event as orbital periods of the Galilean moons are several days long. 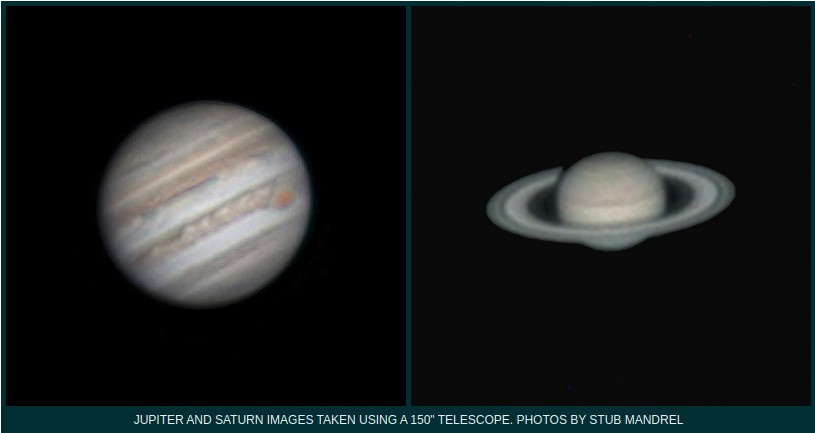 Saturn is perhaps the most beautiful and unusual planet because of its prominent ring system. They are composed of dust, rocky debris and ice particles orbiting the planet. It is possible to observe Saturn rings even with a small telescope with an aperture of 70mm. If you have an instrument with an aperture of 90mm or higher, under good seeing conditions you can see the break in the rings called Cassini Division and the darker polar cap of the planet. And with an aperture more than 150mm, several cloud bands in the planet’s atmosphere will become distinguishable.

A telescope with an objective diameter of 200mm or more will also allow you to observe the largest Saturn moons: Titan, Rhea, Iapetus, and Dione.

Venus is the brightest object in the night sky after the Moon. Sometimes it is visible even during the daytime with the naked eye. Venus, when we view it in a telescope, does not show any details because the planet is covered by an extremely dense and opaque atmosphere. Like the Moon, Venus has four primary phases which can be observed even in a small telescope. When the planet is roughly between the Earth and the Sun, its apparent size is large, and it shows a thin crescent phase. When Venus is near the opposite side of the Sun, its disk is small and it presents a full phase. The full cycle of Venus phases takes 584 days.

Mars through a telescope appears as a small dark round with a red hue. Through a larger telescope and under good observing conditions it is possible to view darker and brighter surface regions and even a white polar cap.