The planet Jupiter has been familiar to people since ancient times. The bright yellowish dot is easy to find in the night sky if one knows when and where to look. Only Mars and Venus can shine brighter. Jupiter is visible to the naked eye for most of the year except for short periods when it is too close to the Sun. Jupiter is so bright that it can easily be seen even in light-polluted skies, so you can observe it in a city. The brightness of Jupiter to the unaided eye depends upon its distance from the Sun and the distance from the Earth to the planet.

Jupiter is visible most of the year in 2022. It is not visible only in January and February when it is near the Sun. The best period for planet observation is July because this month Jupiter is near opposition to the Sun. When Jupiter is in opposition – it will happen on August 19, 2022 – the planet is the biggest and the brightest and its angular diameter is about 50 arcseconds. The list below provides an indication of the times of the day in which to view Jupiter in 2022.

What Time will Jupiter be in the Night Sky Tonight?

To find what time Jupiter is visible in your location you can use free Stellarium software or other planetarium programs. In Stellarium after clicking the Planets Tonight link it opens the Planets Visibility table which shows Jupiter rise and set times. 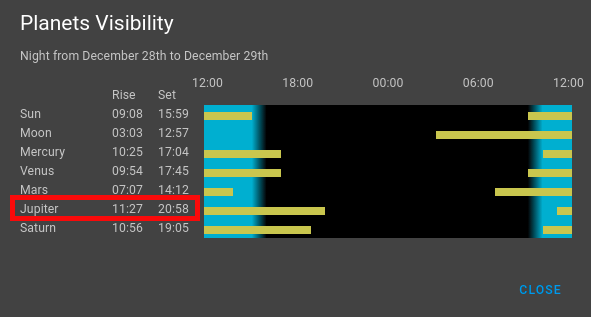 Jupiter in Telescope or Binoculars

Observing Jupiter through a telescope or binoculars is an unforgettable experience, and probably only Saturn and its rings can compare in beauty to this planet. There are three major planets’ targets that amateur astronomers love to observe: Jupiter cloud bands, the Great Red Spot and planets’ largest moons. To observe Jupiter with its details you probably will need to increase magnification of your telescope. To get higher magnification you can use eyepieces with shorter focal length. Another possibility to increase magnification is to use Barlow lens.

Even binoculars or a small telescope with an aperture of 60-90 mm or greater under good weather conditions will show a striped planet disk of the planet. Upper visible layer of Jupiter’s atmosphere are clouds which are organized in a dozen bands parallel to the equator. Due to differences in the chemical composition and temperature, the bands have different colors. A small telescope will show you 2-3 largest cloud bands, but the larger scope with good resolving power will show more bands. Atmospheric flows in the bands have different speeds and this leads to the appearance of the vortices at the bands’ boundaries, and the Great Red Spot is the largest of them.

As of today we know 80 natural satellites of Jupiter but only four largest of them are visible in binoculars or an amateur telescope. These four largest Jupiter’s moons – Io, Europa, Ganymede, and Callisto – are named after god Jupiter’s lovers. They are usually called the Galilean moons, because Italian astronomer Galileo Galilei discovered them in 1610. Galileo not only observed these objects but also concluded that they are orbiting Jupiter. It was a revolutionary idea for those times.

In comparison with other satellites, Galilean moons are very large. Ganymede is the largest satellite in the Solar System. Its size is larger than the size of Mercury. Ganymede, Io, and Callisto are larger than Earth’s moon.

To the naked eye or in a small telescope these four Jupiter’s moons look similar to stars. But they can be distinguished from stars because visually they are near the same line that crosses Jupiter. Four Galilean moons are not always visible at once, because some of them may be behind the planet or in front of the planet. 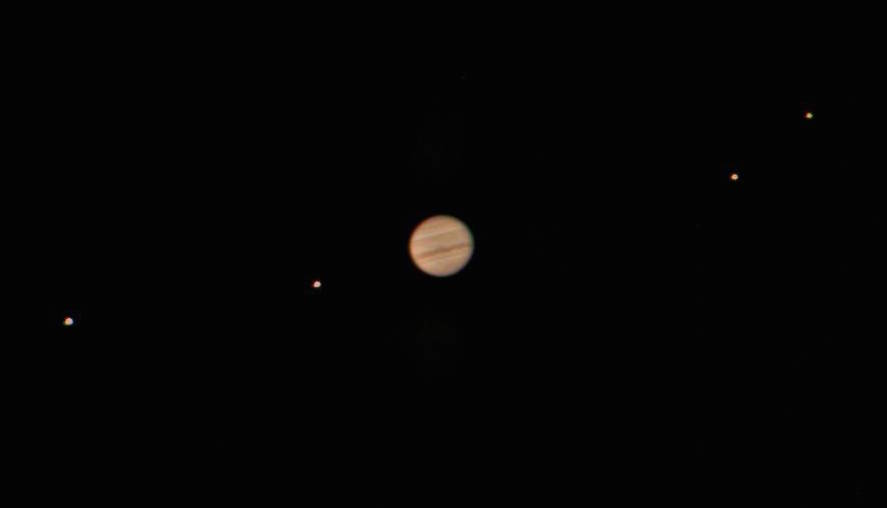 Jupiter and Galilean Moons through a 250 mm aperture telescope. Image by Jan Sandberg

Due to strong Jupiter gravitation Galilean Moons orbit the planet with very high speed. Io, the innermost planet’s satellite, takes only 1.8 days to orbit Jupiter. Europa has an orbital period of 3.6 days which is exactly 2 times Io’s period. And Ganymede’s orbital period is exactly 4 times Io’s period. In comparison with Galilean Moons, the Earth’s moon takes about 28 days to orbit our planet.

Orbitals Periods and Distance from Jupiter of Galilean Moons

Transits and Eclipses of Jupiter's Moons

When one of the Galilean moons is between the observer and Jupiter it drops a shadow on the planet disk. Astronomers call this event a transit, and it is visible through powerful binoculars or a telescope with an aperture of 70 mm or larger. Due to small orbital periods of the satellites, these transits of Galilean moons are quite frequent events. 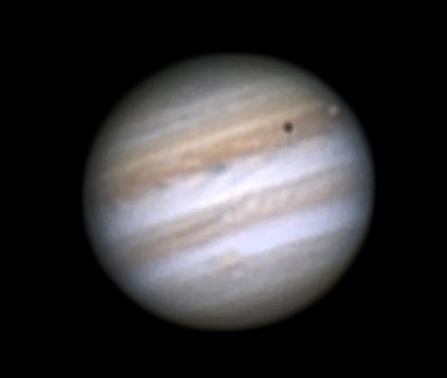 Io transiting Jupiter. Image is taken through an 89 mm aperture telescope with a 2x Barlow lense.
Image by Rob Pettengill.

You can also observe with a small telescope how the Galilean moons go behind Jupiter, ending up in its shadow. This astronomical event is called an eclipse.

In the second half of the 17th century Danish astronomer Ole Rømer observed eclipses of Io and derived the Jupiter moon orbital period this way. Analyzing these calculations he noticed that the period is smaller when the Earth moves towards Jupiter and larger when the Earth moves away from Jupiter. Rømer suggested that this inequality is due to light taking some time to reach the Earth from the Io. Based on this assumption, the astronomical knowledge of that time, and using his observational data, he calculated the speed of light. Rømer’s estimate of speed of light was a value of 220000 km per second which is a quarter less than the modern exact value (c = 300000 km/s). 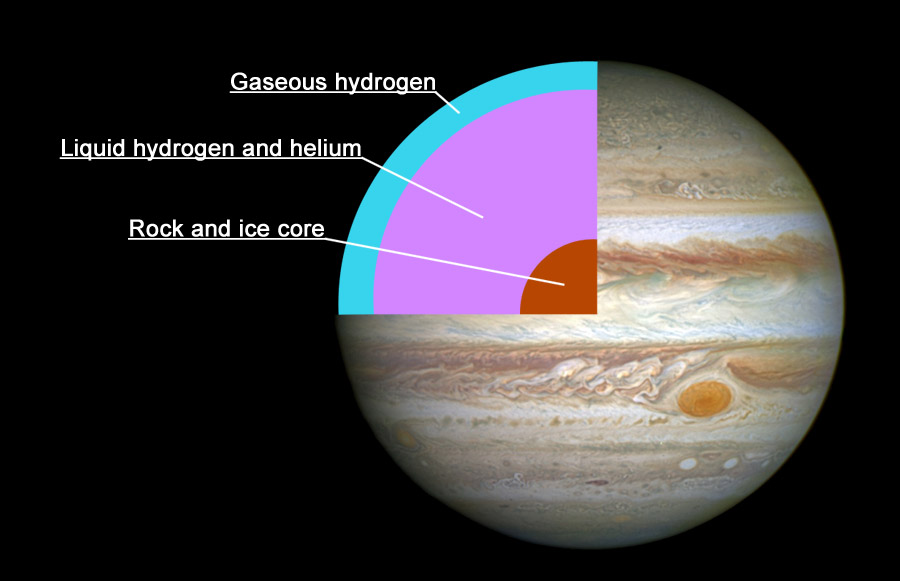 Jupiter is surrounded by a layer of atmosphere about 1000 km thick consisting mainly of hydrogen. This prevents scientists from seeing what is happening on its surface. Deeper under the influence of high pressure, the gasses gradually turn into a liquid phase. Even closer to the planet center there is a large layer of liquid metallic hydrogen. It creates the strong magnetic field of the planet. And in the center of Jupiter is a core of ice and rock. Scientists will continue to study the structure of Jupiter, and the model described may be refined in the future.

1. How large is Jupiter?

2. How did Jupiter get its name?

The modern name of Jupiter comes from the name of the ancient Roman supreme god of thunder. God Jupiter was the son of Saturn and also the brother of Pluto and Neptune.

Jupiter is so large that people often ask why it is not a star. Jupiter consists mostly of hydrogen and helium as a usual star. However, Jupiter’s mass is not enough to become a star like our Sun. Stars glow because hydrogen to helium thermonuclear reaction takes place inside them. To launch this thermonuclear reaction, the star must have the minimum required mass. Scientists calculated that if Jupiter were 80 times heavier, then it would become a star.

4. How bright is Jupiter?

5. Why does Jupiter have no phases?

Jupiter belongs to the so-called “outer” planets, which means that it is located farther from the Sun than the Earth. For visual observation, this leads to the fact that Jupiter has no phases. An observer on Earth always sees the entire Jupiter disk.

6. Does Jupiter have a magnetic field?

Among planets Jupiter has the strongest magnetic field in our Solar System. It is 20,000 times stronger than on Earth. Astrophysicists believe that such a field is created by the movement of metallic hydrogen inside the planet. Jupiter’s magnetic field creates auroras near the planet’s North and South Poles. The planet has the brightest auroras in the Solar System.

7. How strong is Jupiter's gravitation?

Force of gravity on Jupiter’s surface is 2.5 times more than on Earth. Due to its powerful gravity, Jupiter acts as a kind of shield, partially protecting the Earth from comets, as it attracts them to itself.